I love this simple message.

And I’m not just talking about

or an inviting work area

– although I do love all of those things.

This year I’m going to organize myself – –
my attitudes and priorities, my wants and my needs.
I want to prepare the needful things in my life
and establish our house as a house of God.

Among my ancestors in the Berrett family are many pioneers who made the trek from England and Wales to Utah in search of religious freedom.  They traveled by ship, covered wagon, and foot to establish their new homes in the Salt Lake Valley.  One  great-great grandmother, Jemima Brown Rogers, was a handcart pioneer who arrived in Salt Lake City in 1856.  Her story, which I remember hearing from the time I was a young teenager, is remarkable, and I have always been in awe of her courage and determination.

In June 2003 as Youth Conference attendees, Peter and I made a trek of 20+ miles along part of the same route that Grandmother Rogers followed through Wyoming.  The handcarts were heavy and awkward to maneuver – wooden wheels on rocky roads don’t pull smoothly. Our days were hot, the nights were cold (frost on our tents in the morning), and we felt near exhaustion when we crawled into our sleeping bags at night.  But our experience truly pales in comparison to the hardship Jemima endured during her trip many years earlier.  Some excerpts from her history as recorded by her grandson, Nephi James Brown, follow (in green print.)

The Elders found Jemima in her native land of England, and she was baptized [as a member of the Church of Jesus Christ of Latter-day Saints] about 1844.  She saved all the money she could, so that by the early summer of 1856 she had enough, together with some aid given her by her son Thomas who was already in Utah, to start on the long journey to Zion.  At that time she was fifty-three years old.  She and her adopted daughter Lizzie who was 8 or 9 years old, sailed from England in an old fashioned sailing boat, The Thornton.  It took them six weeks to cross the ocean.  This old vessel was at the mercy of the wind and the waves.  They did not have enough food or water on the ship.  They ate a kind of sea biscuit that were so hard they had to break them with a hammer and then soak them for quite a while before they could be forced down.

They continued traveling with a difficult journey across the States to the edge of the Great Plains, but their real difficulties had only commenced.  They were to cross the Plains by handcart.

Three successful handcart companies had crossed the Plains that summer of 1856, arriving safely in Salt Lake City the latter part of September.  However, the fourth handcart company, a group of about 400 under the leadership of Captain James G. Willie, and the fifth, numbering 576 led by Captain Edward Martin met with tragedy.  They were delayed at Iowa City and Florence while gathering tents and supplies and waiting for their handcarts to be constructed.  But rather than waiting until spring to begin the trek, the majority of the group allowed their enthusiasm to overshadow good judgment and they started too late in the year to be reasonably sure of reaching their destination before winter.  Their handcarts had been constructed of green timber and before long they dried out and began to fall apart, requiring repairs that caused further delays.

Wyoming is desolate in the summer.  I find it hard to imagine making that trip in the winter.

Grandmother Rogers and Lizzie were with the Willie Company.  They all had a scant supply of clothing and bedding and found it impossible to keep warm at night even by the middle of September because of the early  heavy frosts.  Heavy snows and extremely cold weather set in much earlier than had been the case for many years.  Their food supply was rationed, and they didn’t have nearly enough to eat.  Snow storms came every few days, and accompanied by fierce howling winds, piled the snow more than a foot and a half deep on the level.  A number of the weaker ones soon died of exposure and lack of food, and were wrapped in sheets by their loved ones and buried in graves hastily dug by the wayside and covered with rocks to keep away the hungry wolves which were a constant menace.

The courageous emigrants continued on pushing and pulling their handcarts,  but their food supplies were rapidly vanishing and there seemed to be no chance of having them replenished.  They slowly trudged forward seeking shelter in hollows and willow thickets until from sheer exhaustion and with scarcely any food, these destitute pioneers established a camp and decided with little hope of survival to await their fate.  Grandmother Rogers recalled that when their food was all gone, all she had to eat was what she called pepper corn – kernels of black pepper which only helped to keep her stomach warm.

Jemima used all the extra clothes and covering she had to keep her young daughter from freezing to death, and as a result suffered such exposure herself that her scalp was frozen and all of her hair dropped out.  She wore various little black lace caps all the rest of her life.

Already established in Salt Lake City, upon hearing of emigrants struggling to arrive in Salt Lake City, by inspiration President Brigham Young organized relief parties in early October, not knowing the real plight of these two handcart companies.  The rescuers started out to meet the handcart pioneers with horses, mules, good wagons and plenty of warm clothing and food.  As the caravans approached the camps of these starving Saints they saw some of the children eating bark from willow trees and in some cases they saw small groups of Saints huddled around and sitting on the bodies of those who had just died until the heat had left those bodies.  Most of the emigrants had given up hope knowing that death would overtake all of them very soon unless help arrived.

After initial contact with the rescue teams, the Willie Company waited two days hoping for more supply wagons before undertaking the worst ordeal of the journey – the five mile climb over Rocky Ridge in a howling blizzard.  The distance between their initial rescue and the campsite was about 12 miles and took some emigrants more than 20 hours to complete.

The surviving pioneers were provided with food and warm clothing and under the direction of the teamsters and their own Captains, they arrived in Salt Lake City the latter part of November 1856.

Grandmother [died] on 25 January 1891 when she was 87 years old.  She was one of the stout-hearted, noble and devout pioneers of Utah.  She did lots of good, her faith was unwavering, and she had a genuine and sincere testimony of the truthfulness of the Gospel.

I hope I never forget the feelings I had as I pulled a handcart over Rocky Ridge on that summer day in 2003.  I tried to imagine my grandmother struggling in a blinding snowstorm, worried about her young daughter, and cold, tired and hungry beyond my comprehension.  I was humbled as I considered the sacrifice she made – and the blessings I enjoy – because of her faith and testimony.

For a greater explanation of handcarts and the role they played in the emigration, go here.

Kate – Lucy – Charlie – Mark
May 8, 2010
Mt. Timpanogos Temple
on the occasion of Lucy’s sealing to her parents 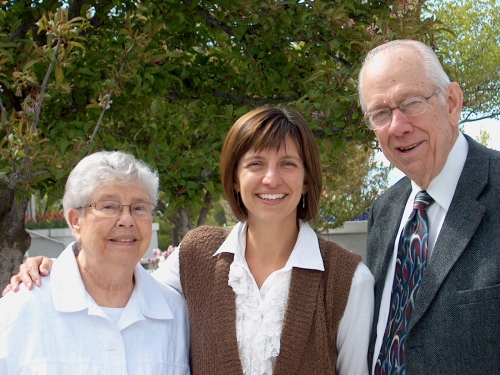 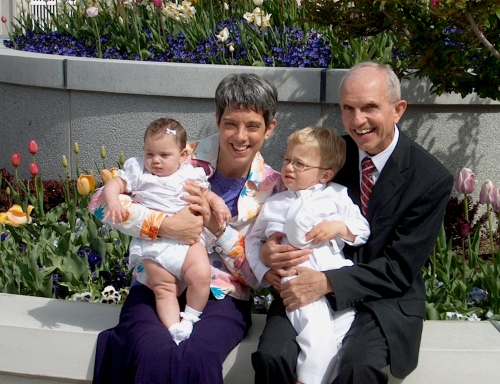 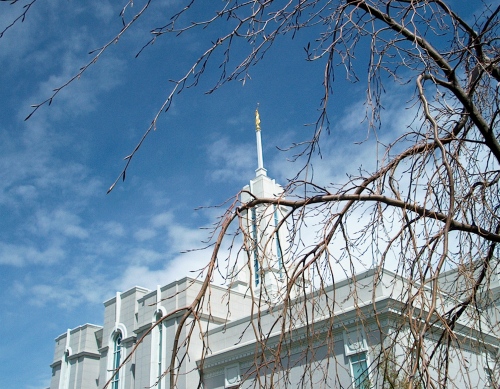 What a glorious day!

This speaks to me.

The weekend of October 3 & 4 brought the broadcast of the LDS General Conference into our home.  I love those April and October weekends of marathon church!  It’s taken me a long time to feel that way, but at this time in my life I really anticipate and appreciate the chance to listen to Church leaders and be uplifted and inspired by talks like this counsel regarding the need to show and express love to my family members, or this powerful testimony of the Book of Mormon, and this gentle reminder to look for opportunities to be of service.

Yesterday while looking for something else (sometimes my lack of organization does pay off), I came across the history of my great grandfather, Thomas B. Brown (27 December 1824 – 18 June 1899).  In light of the previous conference weekend, this excerpt really touched my heart:

“Thomas dearly loved to go to the semi-annual conferences in Salt Lake City.  There was not transportation other than horse and buggy.  Since he had neither of these, he would walk to Salt Lake City.  Two days before conference, Eliza [his wife] would prepare some bread, cheese and fruit, and tie it up in a red handkerchief.  Very early in the morning, he would set out.  He walked as far as Farmington the first day, getting there about dusk.  A fine spring by the side of the road supplied him with a good cold drink of water.  After reaching Farmington, he would go to an old friend’s place, Brother Parret, who came from England also.  He would spend the night with Brother Parret and his family, and arise early the next morning in order to be in Salt Lake City in time for conference.  It would take him two days to complete his journey. He would attend all three days of meetings and then walk back to North Ogden.  He traveled over 100 miles round trip, and did so for many years, twice a year.

Thomas said that when all the apostles and other speakers would talk, it was most grand to hear them, but when Brigham Young stood up he started in where all the others left off.  His sermons were so powerful and inspirational that the other talks were pale in comparison.  Thomas said that if the distance had been twice as far for him to walk, he would have done so, just to have the privilege of hearing Brigham Young speak.  On his return, he always brought his children a treat of store candy.  It was usually peppermints, and oh, how good they tasted coming all the way from Salt Lake City.”

And I was really happy for the faith and conviction of my ancestors . . . as well as the modern convenience of BYU television.